by Punctum Press on Tuesday November 7th, 2017 in Eventi

Léonie saw The Rome Commission as an opportunity to explore her anxieties about the dislocations of the contemporary world, and her fears for the next generation, from the paralysis of mankind in the face of environmental destruction to the growing wealth divide that encourages so many to risk their lives to cross the Mediterranean.

The Rome she encountered at the end of the incredibly hot summer of 2017 was struggling with acute water shortages and failing to cope with the ever growing numbers of migrants. For her the ruins of the classical and monumental became an omnipresent stage to the small stories of the city. Beyond these ruins Léonie searched for her internal vision of a broken world.

She approached the city guided by the Stalkers, an artist’s group renowned for it’s encyclopaedic knowledge of Rome’s unpublicised neglected treasures – its half completed and abandoned building projects, its wastelands returning to wildflowers and animals, the temporary cities on the banks of the Tiber of migrants trapped in legal limbo.

Leonie’s images from these explorations describe a world on the brink of collapse yet teeming with life. Children are ever-present in the series. This dystopian dreamworld spins while they sleep, their innocence counteracts the damage wrought by time and neglect to this city. In their vitality lies the hope for the future of this uncertain world. 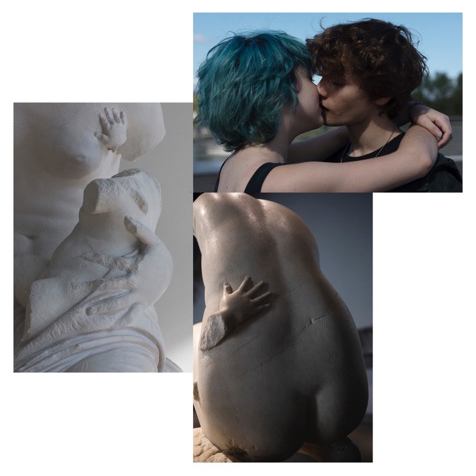